Least-squares offers a number of esoteric technical strengths, but many students of statistics wonder: "Why least-squares?" The simplest (and most superficial) answer is: "Squaring the errors makes them all positive, so that errors with conflicting signs do not cancel each other out in sums or means". While this is true, squaring should seem an odd way to go about this when taking the absolute values of the errors (simply ignoring the signs) is much more straightforward.

Least-squares makes the calculus behind the fitting process extremely easy!

That's it. Statisticians will give all manner of rationalizations, but the real reason least-squares regression is in vogue, is that it is extremely easy to calculate.

There are several ways to perform the L-1 regression, and all of them involve more computation than any of the least-squares procedures. Thankfully, we live in an age in which mechanical computation is plentiful and cheap! Also thankfully, I have written an L-1 regression routine in MATLAB, called L1LinearRegression. 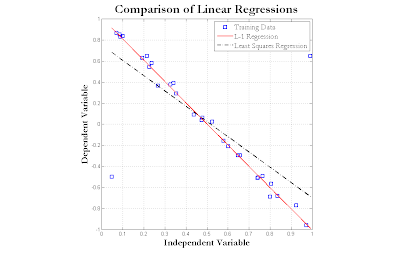 This example intentionally demonstrates least-squares' slavish chasing of distant data points, but the effect is very real. The biggest drawback of L-1 regression is that it takes longer to run. Unless there are many such regressions to perform, execution time is a small matter, which gets smaller every year that computers get faster. L1LinearRegression runs in about 10 seconds for 100,000 observations with 10 predictors on fast PC hardware.