In response to my Nov-10-2006 posting, Introduction To Entropy, an anonymous reader asked:

The short answer is: Yes, we can use entropy for this purpose, although even simpler summary statistics would reveal that the normally distributed randn data included values outside of -1..+1, while the sin data did not.

In this article, I will be using my own entropy calculating routines, which can be found on MATLAB Central: Entropy, JointEntropy, ConditionalEntropy and MutualInformation.

To illustrate this application of entropy, I propose a slightly different problem, in which the sine data and the random data share the same distribution. To achieve this, the "random" data will be a random sample from the sine function:


As a quick check on the distributions, we will examine their respective histograms: 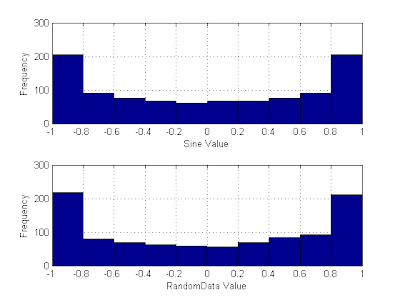 
More or less, they appear to match.

At this point, the reader may be tempted to calculate the entropies of the two distributions, and compare them. Since their distributions (as per the histograms) are similar, we should expect their entropies to also be similar.

To date, this Web log has only dealt with discrete entropy, yet our data is continuous. While there is a continuous entropy, we will stick with the simpler (in my opinion) discrete entropy for now. This requires that the real-valued numbers of our data be converted to symbols. We will accomplish this via quantization ("binning") to 10 levels:


If the MATLAB Statistics Toolbox is installed, one can check the resulting frequencies thus (I apologize for Blogger's butchering of the text formatting):

Now that the data is represented by symbols, we may check the earlier assertion regarding similar distributions yielding similar entropies (measured in bits per observation):


As these are sample statistics, we would not expect them to match exactly, but these are very close.

One important aspect of the structure of a sine curve is that it varies over time (or whatever the domain is). This means that any given sine value is typically very similar to those on either side. With this in mind, we will investigate the conditional entropy of each of these two signals versus themselves, lagged by one observation:

An astute reader may at this point notice that the conditional entropy of the random data, given 1 lagged value, is less than the entropy of the raw random data. This is an artifact of the finite number of samples and the quantization process. Given more observations and a finer quantization, this discrepancy between sample statistics and population statistics will shrink.

Entropy could have been applied to this problem other ways, too. For instance, one might calculate entropy for short time windows. I would point out that other, more traditional procedures might be used instead, such as calculating the auto-correlation for lag 1. It is worth seeing how entropy adds to the analyst's toolbox, though.